Technological Futures: What to Expect 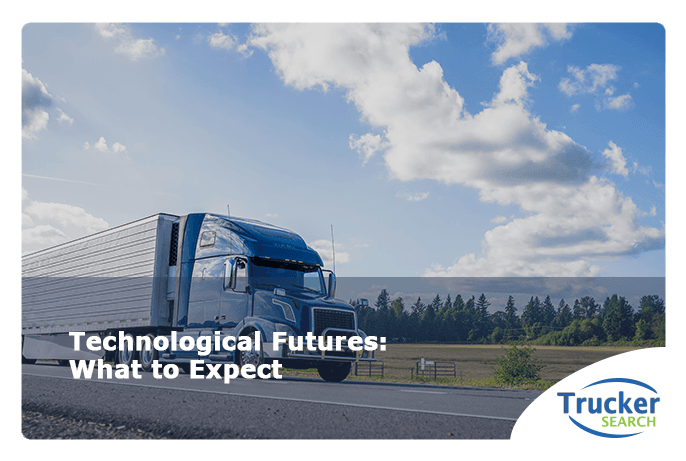 You may hear people say that one day machines will phase out human jobs as they will be faster, stronger, and work longer. This may cause you some worry for your future career path or that of your children; however, as far as engineers and scientists can see, this day is a long way off. The human brain and capacity for fine motor skills is something that no computer can replicate yet, and even when they can replicate some human movements, quality control will always be something distinctly human because even artificially intelligent machines cannot take in all the variables and form a proper judgement.

There is no reason to fear technology becoming more prevalent in the trucking industry because this is a field that requires a human touch. Whether this be in managing time, responding to emergencies, or driving through rough conditions. There are technologies now being developed to assist drivers as they embark on their journeys, and others to help carry the load of this high-demand industry, and each one has its niche, and none of these has the capacity to overshadow the hard work put in by the American Driver!

Self-driving vehicles are a 21st century concept- in the past, vehicles that drove themselves would have likely been perceived as being magical instead of technological. The engineers that have developed not only the heavy machinery but also the software, sensors, and other components of self-driving vehicles have worked hard to create a somewhat autonomous experience. We say somewhat autonomous because many developers have the eventual goal of making an entirely self-driving road-safe vehicle, but a partially autonomous ride has shown to be beneficial for the driver and the industry.

There is a scale that industry professionals use to measure how autonomous a vehicle is- on a rating level from 0-5 with 0 being no autonomy, and 5 being fully automatic with no assistance required. There are no approved for road vehicles (cars or trucks) that have a level 5 rating. However, many trucks today actually have ratings in between 1-3 and some have even achieved a 4. These trucks make it easier for drivers to stay safe and remain stress free as they have advanced safety measures such as quick braking and cameras to show when someone can switch lanes safely.

Gadgets and Software for the Driver

In addition to vehicles being autonomous, one of the most important developments of the technological revolution is the presence of gadgets and software that can improve the quality of a drive for those working in the industry. GPS technology is getting better, and now you can even map out a route with stops along the way for food, rest, and quick breaks. Planning ahead, and knowing exactly where you are is a gamechanger from the past of reading confusing paper maps and struggling to find your way. You can now even use apps on your phone to track your health, listen to engaging podcasts or music, and set reminders for yourself to take a break or get some rest!

Technology can seem scary especially when there is a chance of career theft via robot, but this will be a long time in the future. Even then, the human brain is superior to any machine, and drivers even in the future will be able to secure jobs and make a living being the heart of the American economy! Right now, it’s a great idea to reap the benefits of technology, and become the safest and healthiest driver you can be!

The Value of Planning Your Route Carefully

A useful anecdote that I often repeat to myself is “careful planning and goal setting are the keys to a happy and healthy life.” This is especially true when working and forming healthy lifestyles. In addition to making life easier, planning will also help you remain punctual and will give you some flexibility because you know the time that you need to be at a pickup or drop off along the route.

It may not be incredibly far in advance of a trip that you find out your route but taking even 15 minutes to delineate when you should be where and when you should take a break can save you a lot of time in the future. Adding stops into your GPS (or on your map if you’re more old-fashioned) can help you make sure you take adequate break time and recharge more efficiently. With a schedule, you can get more done and save time while you’re at it!

How do you build a plan even in a time crunch? The best way to do this is look at a map of your route and the specific drop-off and pick up times between each part of your journey, if there is a difference in the time it takes between transit and your next point of cargo transfer, you can use this extra time to take a break either for activity, rest, or a bite to eat.

If you are a local driver, you will likely have more stops to plan around, so familiarize yourself with the area and locate nearby parks, quick restaurants, or greenways so you can get in some quick activity and hopefully healthy food. If you are a long-haul driver, planning is even more crucial because you will likely be in unfamiliar territory. Look at your route and plan around avoiding high-theft locations, and finding safe spots to rest, eat, and take breaks. For each type of driver, it is a good idea to write down what time you should be where and follow this to the best of your ability. You can even use your phone to write down times or set reminders!

Creating a schedule will help you to stay healthy because it allows you to plan out restaurants in advance, so that you can avoid the high fat, sodium, and sugar meals that are so tempting on the road. Finding restaurants that offer healthier meals can be a life and health saver as you continue taking on new cargo. Planning well is a part of forming healthier habits for the road, and your body will surely thank you for this.

In addition to eating healthily, you can also plan for exercise and stretch breaks. Taking a walk in between long hours of driving can help you to stay fresh and fit. Remembering to stretch can also be beneficial because it will help you stay flexible and avoid stiffness and pain as the hours get long between pickups and drop offs.

Planning ahead can be an actual lifesaver, and less drastically can greatly improve your health and timeliness in transporting cargo! Writing down details and a schedule for your route and setting reminders with your phone can be a great way to make your route happier, healthier, and more on-time! There are plenty of online resources to help with this, so do some research and create a custom way of planning that suits your needs.