Tackling the pandemic has been on the minds of drivers since the beginning. From distributing daily essentials to ensuring vaccines will make it to their administration locations on time, truck drivers have provided a means for all of this to happen effectively. With the return to an almost pre-pandemic volume of trucks on the road, there is a new aspect of the industry to be explored and that is the logistical demands of vaccine transport and delivery.

While many transportation vehicles, of all varieties, will be used to ensure that vaccines are being transported throughout the country and worldwide, trucks are the most prevalent means of getting vaccines to where they are needed. Even after a vaccine shipment leaves a boat or plane, a truck will then transport it to its destination. Speed is crucial in the vaccination process, as of right now, due to the need throughout the nation and the requirement that the vaccines be kept cold to remain effective.

Many trucks have been fitted with new equipment to preserve the extremely cold temperatures necessary for the vaccine to be properly stored. Some companies have created specially designed containers to keep everything cool as well. According to CNBC, the only companies shipping vaccinations throughout the nation are the largest logistical organizations in the country, UPS and FedEx. They have decided to divide the states into groups that each respective company will ship the vaccines to in a “divide and conquer” strategy.

Huge shipments of vaccines are currently being transported all over the nation, and this will likely continue until most people have received vaccinations and there is no longer a need. This will likely take a while as vaccines can only be produced so fast. Even with one of the best logistical systems in the world working as quickly as possible, there are still limitations. However, it is truly incredible to think of the speed at which even the smallest of towns and largest of cities are receiving vaccinations to keep their populations safe.

Truck drivers play a crucial role in the supply chain as they are the bridge between producer and consumer. Without the bridge, the entire system would collapse. With the increase in vaccine production and need, truck drivers across the nation have stepped up to ensure that the bridge is strong and wide enough for adequate numbers of vaccinations to be provided. This is a difficult and stressful undertaking, and we would like to thank every driver that has taken part in distributing vaccines.

Truck drivers across the nation, from those who have transported vaccines to those who ensure the store shelves are filled are the unsung heroes of the pandemic. They have transported these items everywhere that they have been needed, even when times were uncertain. Even though many drivers will likely not be a part of the vaccine distribution process, all drivers are important to the health and safety of all people in our nation and beyond.

Truck driving is a difficult, yet rewarding career, and there is definitely no greater reward than knowing that you are keeping thousands of people safe just by doing your job. Thank you to all drivers who have worked during this pandemic. Without you, things would have been much worse. With your hard work and dedication, we are on the path to rebuilding and becoming better than ever before! 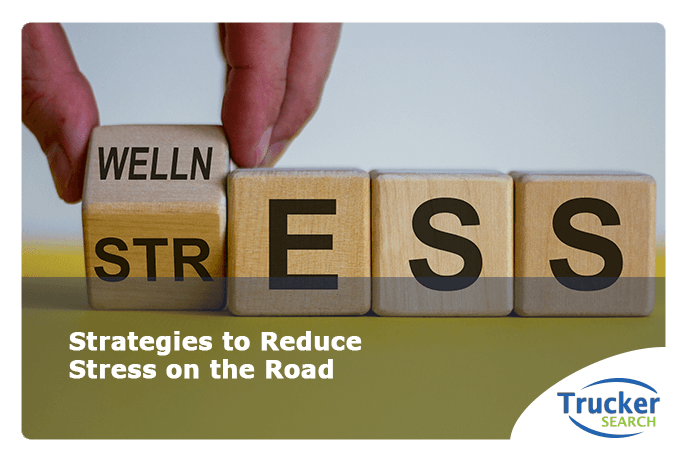 “That stresses me out!” This is a phrase that we hear often about a variety of subjects. Stress is something that all people deal with to some degree, as it is a biological response to a stimulus that is perceived as being dangerous or concerning. Stress is a feeling of physical tension and anxiety and cortisol, the primary hormone associated with stress, is known to raise blood pressure and increase heart rates in those with higher-than-normal levels.

The Wear of the Road

Truck driving can be a very rewarding career with the ability to travel across the nation and solid pay after a few years of experience. However, this can also be a very stressful career as it is fast-paced, full of responsibility, and hugely schedule-dependent. Managing the safety of your cargo while providing expedient transport is a big responsibility, and can be very anxiety-inducing when it seems like you cannot make it to your destination on time.

These worries, coupled with long hours, can lead to a lot of stress which can be unhealthy for extended periods of time. This keeps your body running in survival mode which can lead to many ill effects on your health like, an increased risk of heart attack and stroke (According to the American Psychological Association). The good news is that stress is manageable with some effort and this means that you can remain calm and secure even in the worst situations.

Stress seems like an insurmountable wall when you experience it firsthand, but it is possible to overcome the anxiety of the moment. One of the best things to remember when facing a stressful situation is that it will not last forever, and you will be free from it soon. If you find yourself experiencing stress, try to breathe slowly and evenly to lower your heart rate and blood pressure to reduce the panic response your body is producing. It may help to go to a quiet room or pull off at a truck stop to walk around for a minute or two. After you have initially calmed down, it is important to address the stress.

The best way to keep stress under control is by being aware of the things that cause you stress and learning how to better approach them before they upset you. Writing down things that cause you stress, and attempting to remove your exposure to them can be one strategy of reducing the number of stressors you are exposed to. If you cannot avoid the things that are stressing you out, it may be a good idea to find ways to better cope with them- this may take time and some compromise. For example, if you find yourself worrying about time, it can be a good idea to write down a schedule and try to stick to it. Simply writing down tasks you need to complete or times you need to arrive at various destinations can help you reduce the load on your brain and keep your thoughts organized.

A Note of Encouragement

Stress can be difficult and unhealthy, but it is possible to reduce the amount of stressful thoughts. Getting organized and giving yourself mental breaks, while trying to maintain regular breathing, goes a long way in reducing the stress you may experience. There are plenty of resources, with a wide array of strategies, available to help keep your stress at bay. Some may work better than others, so it is important to explore and find the strategy that is best for you.