How the Suez Canal crisis may affect trucking 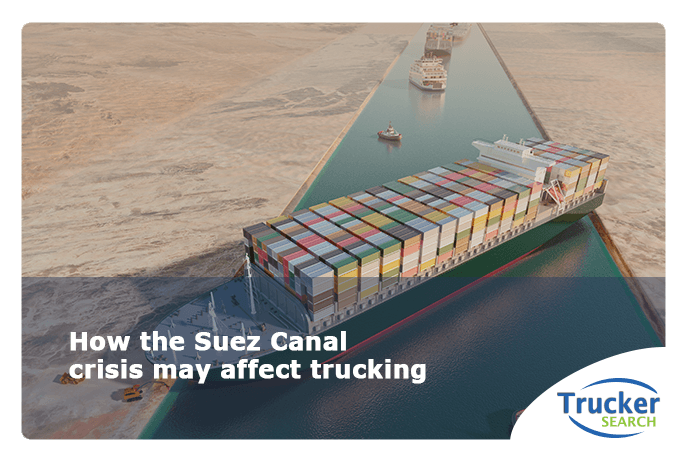 The story of the quarter mile-long Ever Given cargo ship becoming beached in the Suez Canal has been all over the media recently. Blocking one of the world’s most important shipping routes for 6 days, the stalling of the Ever Given has created a crisis that has cost billions in trade and has slowed down shipping for weeks due to the backlog of ships. So, what does this have to do with the transportation of goods on trucks in the United States?

It may have a considerable impact. Even though domestic goods can be shipped as scheduled, international imports may be severely delayed, leading to disrupted routes and a lull in transportation, until the effects of the crisis are mitigated. There are many benefits to participating in a globalized economy of the 21st century including decreased costs of importing and exporting goods, but when a major crisis occurs such as in the Suez Canal, almost every industry whether international or domestic can expect to take a hit.

The Suez Canal is the largest canal in the World without locks (locks are mechanically operated dams that change the water levels of an area allowing them to be raised and lowered to accommodate the change in topography between two bodies of water). The canal was first constructed in 1869 by French Investors taking advantage of the thin stretch of land between mainland Egypt and the Isthmus of Suez to provide a more expedient trade route from Asia to Europe.

Since then, it has provided a major international shipping lane which reduces the duration of transit by an average of 10 days from alternative routes. Other major blockages include the Suez Crisis in 1956 and a blockage by a Russian ship in 2004. Each blockage of the canal has reinforced the appreciation of the importance of this trade route in international commerce.

A few weeks ago the Ever Given, a Taiwanese cargo ship, was grounded as it was pushed into the shallows of the Suez Canal by strong winds. This colossal ship blocked the canal off and required a large team of engineers and tugboats to free the ship, 6 days after it had been stuck. This sticky situation caused over 400 ships to be backlogged at the canal, and countless others to be delayed as they were redirected to go around the Cape of Good Hope at the bottom of the African continent, which adds another 10 days on average to the journey.

The cost of goods being delayed because of this crisis is estimated to be around $9.6 billion, or around $6.7 million per minute of the blockage. This has a major economic impact on industries around the globe as this is a large amount of goods that are delayed.

The Domestic Economic Issue with the Crisis

The Suez Canal incident may have serious domestic implications, especially when imported goods are expected to arrive at a specific time. It is likely that the supply chain will be slowed for a long time until returning to normal due to the huge impact of the blockage. In addition to the slow down, some goods may not be able to be transported as perishable shipments may have to be discarded because of their time-sensitive nature. Imported food shipments may be reduced during this time because of the perishable goods being thrown out.

Even with the devastating effect on the economy and effectiveness of the supply chain through the Suez Canal, the global market will recover soon. The people that maintain the canal now know how to resolve blockages more rapidly in the future. The trucking industry will likely take a small financial hit, especially in the imported goods sector, but huge losses and delays are unlikely.