What industries does the trucking industry serve? 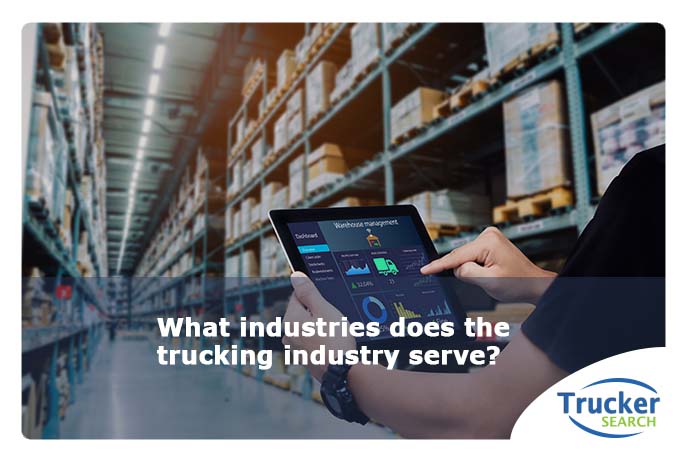 Ever since the global transportation system has existed (first on ships, horses, and carriages, then trains, trucks, and airplanes), it has filled a major economic need that exists in the niche between supply and demand which is transportation. In large amounts, and over great distances, goods are often hard to carry from point A to point B without the proper equipment. Agencies dedicated to transport play a major role in transitioning products to their points of sale or distribution.

The painstaking efforts that drivers put in to make sure that goods arrive safely are what make the trucking industry shine, and this care is greatly appreciated by all other industries served by trucking. Drivers are often underappreciated for the incredible work they do daily. They deserve high praise for carrying the American Economy and allowing our country to thrive.

Drivers can work for a trucking company, themselves, or a specific industry other than general trucking, and their careers can range from long haul drives to regional transit. Each of these positions are important to the economy of the nation and individual industries. Some of the most common industries served by the trucking industry include, Transportation & Public Utilities, Wholesale & Retail Trade, Services, Manufacturing, Construction, Agriculture, and Mining, according to TheTrucker.com.

The most prevalent industry that trucking helps directly is that related to Transportation and Public Utilities. Drivers with the most diverse set of impacts are those that work in the for-hire side of the industry, which takes jobs from many different businesses and organizations. Private drivers also have a huge impact making up over 45% of the total number of drivers in the United States. Private drivers are usually hired directly by the businesses they represent, while for-hire drivers often work for a larger trucking company or themselves.

There is a term in biology called ‘mutualism’, which is a fancy word for saying a relationship where both organisms benefit. The trucking industry exists in a mutualistic relationship with nearly every other industry in the United States. This mutually beneficial coexistence is what helps the country’s economy remain so strong, and it is why trucking is such an important industry in the survival and growth of the economy.

Trucking is an incredibly important industry for several reasons. It brings supplies to the people who need them, it helps other industries distribute their goods, and it connects the United States from coast to coast. Trucking is also making huge steps forward in becoming more environmentally friendly, which will help the economy by reducing fuel costs and creating less strain on other industries!